After the triple-DNF disappointment of Silverstone I went to Donington determined to not only finish races but to improve significantly on my personal lap record which I had set in the single 750MC Roadsports endurance race I entered the Boxster in on the same GP circuit last June. Rain was forecast for pretty much the entire weekend and sure enough all three races did end up being wet, but there was just enough dry running for me to take nearly three seconds off my best in the last-but-one lap of qualifying.

Races 1 and 2 both started dry so I took the car out on slick Dunlops (part-worn rears with brand new fronts) but I had the fun of coaxing the car around with seriously reduced grip once the rain started – with only 30-minute races and 5-stud wheels, its impractical to change tyres during a race. An accident at Redgate on the first lap took three cars out of the equation and meant several laps behind the safety car. Most of the field chose this opportunity to make their compulsory pit stop but I decided to stay out and was overall second for a while. Once the track was wet though my pace dropped off; although the rest of the field soon caught me, I still finished the race 5th overall and 3rd in class.

Onto Sunday (most of the Trophy events are single day) and the second race saw me start from the third row based on my finish in Race 1. Conditions were similar to the day before – just with less carnage – but the track stayed dry long enough for me to shave a further second off my lap record (see video) and even with more of the field completing the race, I improved my result again finishing 5th overall but 2nd in class – equalling my career best result. There was only one non-finisher this time, where a Seat Leon span at the bottom of Craner Curves resulting in a shorter safety car deployment.

Video of my fastest lap from the weekend – click through to watch it on YouTube for best quality.

The final race of the weekend proved to be by far the wettest and this time we elected to fit my previously unused set of Dunlop wets. I’d already been told to expect far more grip from these than from the Toyo R888s I used for my previous seasons but in the race I held back, preferring to complete three out of three races over binning it! We were led out for two laps behind the safety car and I pitted late in the race and completed the weekend with a 7th overall, 3rd in class and zero damage. 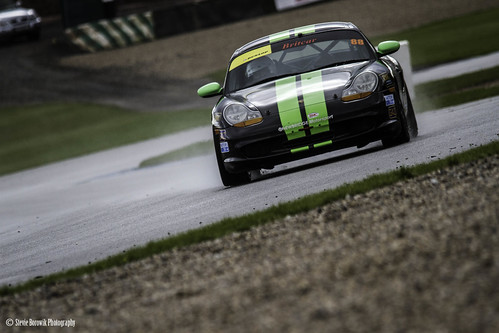 Perhaps I’m getting over my hatred of racing in the rain because it was a hugely enjoyable weekend and I think I’m finally getting a feel for the grip limit of the Dunlop tyres. Richard, my Newbridge team manager, was hugely impressed with how much I had improved my personal best.

Our next round is on 14th June at Thruxton – a circuit I have only been to twice and never driven, and unfortunately there is no opportunity to drive the track before hand as track days and test sessions are very rare. I will watch videos on YouTube to try to learn the lines but I know this will be no substitute for time behind the wheel.